I would put babies in a corner (and run away)

So its not enough that Jamie and I don't have kids. Most of the folks we know either (a) don't have kids, (b) have kids but we weren't nearby during the earlier days/ birthing of kids, or (c) have not added us to the mix for their baby showers, etc... So I'm never around babies or people having babies.

Letty and Juan are due fairly soon, and as they're good pals who we see regularly, we're involved in a baby shower this weekend. Which... Jamie and I don't know anything about babies. I mean, I know they're small people with no bowel control and that people have created this whole fiction about the joys of a baby when the sleepness nights, added expenses and trips to the ER, etc... sort of seem to speak otherwise (Your Unkle League isn't here to mince words tonight), and that it usually means a major, major lifestyle change for the happy parents. 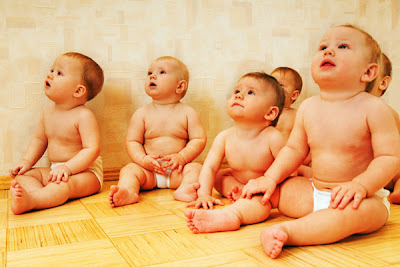 But on a practical level... I don't know anything about babies. I don't think I'd ever been into a Babies 'R Us before this evening. I have no idea what the hell any of that stuff is in there. I literally have no idea what one of the items we bought for the baby is for, and there's a picture of it in use right there on the package. And that's more or less how I felt about 90% of the baby goods we looked at. I assume some of this stuff existed when I dropped into existence, but who knows?

Most of the stuff seems like its based around trying to make the leaking fluids and other bio-byproducts from your bundle of joy under control, which is a noble reason to own stuff, indeed. Its also priced very reasonably. Mostly because your kid is going to outgrow it or somehow destroy it before too long, I guess.

I did learn that Jamie and I would cross swords, were we to decorate a nursery. I mean, I know I'm right. Puppies are a better option than jungle animals, right? It is probably socially unacceptable to own a "puppy lamp" intended for a nursery. So, no, I did not buy it for myself. Even if it was adorable.

Anyway, kudos to you people who do the whole baby thing. It still totally freaks me out.

But I am very happy for Juan and Letty. They're a happily married couple, and I know they will raise a kick-ass kid. They really want to be parents, and I see no reason they won't do a phenomenal job. Should be a blast watching what they do, given a little mind to mold.

And I will enjoy sleeping through the night. Except when Jeff the Cat wakes me up like he did last night.
Posted by The League at 10:59 PM

Get them a diaper genie. Those things are awesome.

I never said I didn't like the puppies. I just thought the lion was cute. The puppy mobile was adorable.

Whatever, you so would have every inch of that kid's room decked out in red, yellow, and blue.

Cute jungle animals were the choice at our home.

I don't wish to malign the jungle animals. Those were just very cute puppy home accutrements.

And, Randy, I think I DID buy you a diaper genie. I bought somebody a diaper genie, anyway, because I remember not knowing what that was, either.

It was you who bought me a diaper genie. We praise you everytime a diaper full of poo is stuffed in it. And so you should get Juan and Letty one also.

haha. Babies R Us is a hellhole that gives me a migraine every single time I go there. You do not need 90% of the garbage that they try to sell you.

You totally understand. Fluids go in and out. Babies often smell bad, but sometimes they smell oh so nice. I didn't know squat about kids until I got sent home from the hospital with TWO. CALL CPS!!

But seriously...bayyybeehhhs rock. Congratulations to Juan and Letty!
-Denise

I particularly liked that video you or Mr. Denise posted a few weeks back of your kids playing with your dog. All three are rock stars.