Jon and Kate plus 8 plus "Mystery woman"

Oh, man. There is no way for me not to come off all judgy and jerk-like on this one, but its my theme of the week, so here goes.

Who called it just a few months ago?

I watch the TLC show "Jon and Kate Plus 8" religiously while blogging on Monday nights. It's masochistic, and I admit, I watch for all the wrong reasons. TLC either is unaware of, or knows and doesn't care, that its been documenting a show less about a couple struggling to raise 8 kids than it's been documenting a man's slow emotional evisceration. Its not a great reason to be hooked on a show, but hooked on it, I am.

And I wanted to be there when he cracked. And crack, he (apparently) finally did. 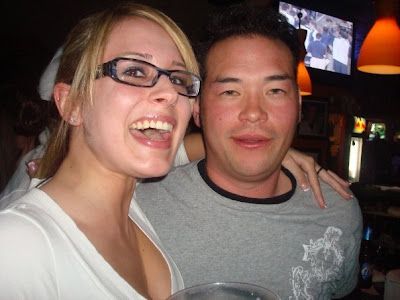 Jon and not Kate

Sure, Jon TOLD the crew on the last episode of the most recent season that he didn't want to do the show anymore, and he's taken to staring without blinking for entire episodes... And, possibly partying with co-eds. But Kate loves doing the show, loves being famous for being herself, loves being told she's a great person, and loves having the platform for her celebrity and associated benefits/ money.

Jon will, of course, be vilified, and people will ask "how could he do it?"

I shall tell you!

1) Jon married a terrible harpy of a woman who takes pleasure in emasculating him at every opportunity. If you identify with Kate, I highly recommend standing up, walking to your spouse and apologizing. Because its possible you're a terrible, terrible person. Kate is.
2) He mistakenly gave birth to 8 children, 6 of them at the same time, all of whom communicate by screaming and crying every minute in which they are awake, if the show is any indication. As part of the show, he has to stay home all day with these kids he accidentally made with whatever fertility treatment Octomom must have used.
3) He hates being on the TV show, and being the object of constant, unwanted attention. He said so right on the show.
4) His income, needed to support the 8 screaming children and the horrible harpy lady, stems from being on the TV show. Whatever IT career he supposedly has is a shell of whatever it was.
5) The ratio of screaming kids and wife berating him at every turn versus anything resembling kindness or gratitude or anybody noting that he's involved in this, too, is about 100 to 1.
6) Ever see Jon with friends or family other than Kate? Think maybe there's something to all that?
7) Also, Kate is awful.
8) Jon is in a living hell of his own making. And I pity that man every day.

Does all of this pressure mean Jon is entitled to cheat on his wife and bring shame upon his children? I'll leave that for another person to determine. I know the "right" answer is to say "no, he shouldn't do that", but... have you watched that show? They're lucky that picking up co-eds is all he's doing and they can actually find him when they look for him. 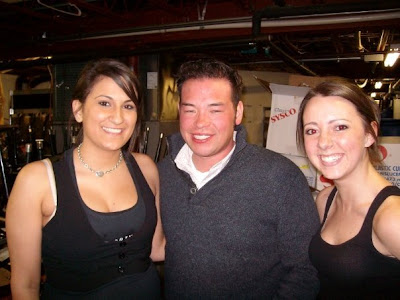 Here's a lesson to take home, Leaguers: if you treat the person you married with no ounce of love or respect (especially in public/ on TV), eventually, they are going to decide they don't respect you, either.

And if they don't respect you, and you have put them in a position where you're making their life a living hell? They won't really care about the consequences of their actions and how it reflects on either of you.

In February I said:

I look forward to the day when we all find out Jon fled on a very special episode of "Kate Plus 8 (minus Jon and his Income)".

Indeed, that day is already here.

I guess I'm sort of interested in the cult of personality Kate has built of people who think she's a good enough idea that they buy her books and whatnot. I assume many people raising young ones feel a certain kinship with Kate, especially those who may imagine themselves or relate to Kate's pithy comments at a husband who seemingly just doesn't get it.

There's a lesson here somewhere about fame, fertility drugs, etc... but there's also a lesson about two people who very publicly want different things and its led to one of them not caring about their marriage, and I'd question whether either of them care, but for different reasons. And why you shouldn't ever really want to be on TV.

A show about the joys of family has turned into sort of the opposite. And there are eight kids who are going to be able to buy the DVD set of the dissolution of their parents' marriage.

Also, that Matt Roloff dude on Little People, Big World? He totally got picked up for a DUI in 2007ish. Apparently it was his second.
Posted by The League at 9:49 PM

I haven't watched the show to nearly the extent that The League has (I think I've only seen it at his house), but Jon does seem like a really nice guy who keeps trying to be positive while his wife seems to find what little joy she possesses in cutting him off at the knees every chance she gets. All of that being said, Jon should have stood up to her a long time ago, maybe suggested counselling, or even just gotten a divorce. The guy has repeatedly allowed himself to be treated like a doormat and taken the coward's way out (or whatever seemed like the path of least resistance at that moment) at every turn. CLICHE BOMB: No one's gonna help you if you don't help yourself.
Anyway, I'm not sure exactly how far Jon's transgressions went, but I'd bet that this whole thing just results in a "serious talk" and that this guy comes out of it feeling even more beholden to his wife, with her lording this incident over his head and making him feel even more beaten down than before. So that's MY prediction.

Sad, poor Jon. TLC needs to take some responsibility and provide an on set counselor or freely available therapist to the couple. Their exploitation of this family knows no bounds.

I've seen just enough to agree with you.

I saw Jon and thought, "Holy crap, that would be me if my wife was EvilJen!"

... actually her nickname is EvilJen.... but that's for a totally different reason.