In 1988, Ruby-Spears, who was responsible for a lot of the animation folks my age grew up on, put out a Superman cartoon. I've never had opportunity to see it except as clips on YouTube.

It seems that either Austin didn't carry the show, or I wasn't rising early enough on Saturday to catch it. At any rate, the show didn't last long, and has largely been forgotten.

WB's Home Video group must know that the Superman contingency will buy anything with the "S" on it, because they do, in fact, have a steady stream of these sorts of things that have been coming out of the vault since around '03.

According to The Superman Homepage, the cartoon is getting its due and coming to Home Video in November.

I'm 34 and have a mortgage, so its pretty obvious I should care a lot about this sort of thing, I would think.

Anyway, yes, this thing will find its way into The League's official Superman Library.

Here's the opening for the show.

Apparently Italian Communists have stumbled across Mark Millar's re-telling of the Superman mythos, "Red Son", in which an infant Superman lands in a Stalinist Collective Farm instead of Kansas. Raised in that sort of parallel world of Russia we all learned about from movies like "Firefox" (which was awesome), Kal-El becomes a great Commie Benefactor to his Commie People, fighting off Capitalist Pigs like Lex Luthor (whose wife, Lois, carries a torch for the barrel chested bread-line-stander).

In our actual world, having not learned that Communism failed or turned into N. Korea, the Italian Communist Party (again, this part is real, not a comic) has adopted the Hammer and Sickle Super-Emblem and artwork from the comic for their very own. Luckily, the commies are looking to make a buck off the shirts. 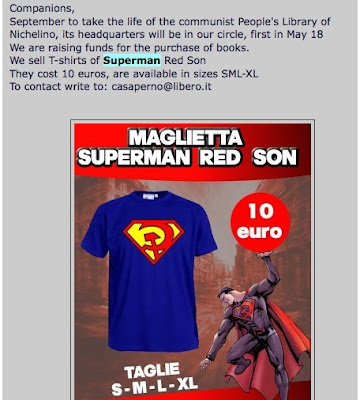 I'd buy that for a lira!

Much more on this here.

It is clear the Commies are failing. They do not offer the shirt in the more prosperous sizes I would need to fit into one of their T's.

So there's a rumor going around that the next Superman feature will be helmed by the Wachowski Bros., who lost Warner Bros. an untold fortune with the epic fail that was "Speed Racer". Here.

What nobody seems to notice is that this is the same rumor from February. That was debunked back then.

That hasn't kept the Super-nerds from totally freaking out.

Superman of the Muslim Persuasion?

I assure you, if you're a DC fan and don't buy into wing-nut conspiracy theories, this is hilarious.

from our Canadian Friend, Simon.
Posted by The League at 9:51 PM

I remember being mostly bored by Firefox. It was the first in a long line of Eastwood movies that have bored me (Unforgiven, the rob-the-president one, a couple of others).

No way! It had that awesome chase scene over the Urals, and all the sneaky espionage-y stuff before that. Also, I haven't seen it since '87 or so.

Hang on a second, the italian COMMUNIST party is SELLING shirts. Methinks by working something else is breaking.

I do not fail to see the irony. Maybe as long as the money goes back to the kollective, its ok? I have no idea how this works.