I'm behind the government looking to offer an insurance option. And, honestly, I am more than okay with it if we wind up with socialized medicine. I know that's not fashionable, or what you're supposed to say as a "good American", or whatever, but thanks to the day-to-day life that Jamie and I live, I simply believe there's too much at stake.

At age 17, Jamie was diagnosed with something called Focal Segmental Glomerulosclerosis (FSGS). The cause is unknown. It strikes all kinds of people, and it shuts down your kidneys completely. Were it the 1950's when Jamie was diagnosed, she would have been dead long ago.

She's had two transplants. She's been on dialysis twice for a total of about 8 years. That means she gets up 3 days a week, has large needles jammed into her arms, all her blood removed, cleansed with chemicals and returned. She can't work. Travel, diet and lifestyle are deeply restricted. And she does it all without complaint. People who meet her do not begin to guess that she's anything but a 30-something young woman with a cheery attitude.

Currently, she is on Medicare. Almost all people on dialysis, as I gather it, are also on Medicare thanks to being classified as something called "endstage renal failure". Ie: The Government recognizes that you are likely to die, and will die, without the government assisting with the cost (ie: doing what your insurance carrier won't or can't) to keep you alive. Medicare is often criticized and reviled as socialized medicine.

That is not her only coverage. Medicare takes things to a certain point, but she also has coverage extended by my employer. I was almost not offered any coverage by my former employer for Jamie (but that was a deal breaker, so we negotiated). I note this as many smaller, Main Street USA companies, can only afford to offer limited coverage.

Somewhere in the federal government, someone made a decision, again, not to burden insurance companies with the hundreds, if not thousands of dollars, that get wrapped up in each dialysis treatment. Somehow that all works itself out.

Many of you may not know this, but in order to insure that the benefits will not disappear or change willy-nilly, I more or less have to work for a very large employer with excellent coverage to get the rest of Jamie's expenses (medicine, co-pays for visits, etc..) covered. And even then, that doesn't include the deductible.

If you are genuinely concerned for corporations, you may wish to know, many companies aren't so much paying into an insurance collective, as much as covering your costs. They have a risk pool, that basically means they are covering your bills as part of their expenses. It's much easier for large companies and agencies to absorb than small companies. So smaller employers taking me on are taking on what they may not consider to be a good investment. I more or less have to disappear into, say, The State of Texas, and hope I'm not the one with the craziest story. There is no scenario in which Medicare hasn't been a part in many years, but I can only assume that were it not in existence, I'd be enough of a financial burden that companies would be looking to release me to reduce their costs.

I absolutely freak out when I think of how things go wrong with insurers. And a few times they could have.

Hospital financial folks have routinely tried to find ways to get Jamie bumped from having Medicare as her primary insurer, intentionally and otherwise. Jamie has spent work weeks on the phone with the insurance companies sorting her situations. One doctor started Jamie on a treatment that an insurer decided sounded a little "experimental" for their tastes, which, given that it had already started, would have wiped us out completely had a weeks-long letter-writing campaign not ensued (I was looking at our options for a legal annulment to see if that wouldn't help solidify our financial picture).

Through all of this, Jamie has managed to have phenomenal doctors, paid in whole or part by Medicare. I think they probably do okay, financially. I should mention that her quality of treatment had everything to do with the quality of her doctor, which varied wildly, and who, I am sure, had no idea who was paying them.

We know for a fact that Norway, Denmark, France, England, and many other perfectly healthy, educated countries get by just fine with socialized medicine. Pointing to the occasional Canadian who visits the US to expedite their treatment shouldn't really convince anyone the system is a failure, any more than Americans flying to India for cheap surgery indicates that's the only option. The Canadians are not dropping dead in the streets.

And, hey America, take it as a challenge to sort out the the issues that you feel our European and Northern neighbors have not worked out. Does America believe that the Canadians or French have the last word on how this could work? I say boo to this lack of vision.

Secondly, consider the sources who are telling you new policy will kill old people, that it will mean worse care (doctors are generally only spending about five minutes with each patient these days, anyway), etc... Before listening to that Rep or Senator, see how much they took from medical lobbyists in the past year. I'm not saying your local politician is a crook, but the lobbies don't just give away money because its fun.

Thirdly, I understand that Medicare alone has not paid for the system we currently have. But it also isn't NOT helping fund our current system. Nor are you already not basically paying for collective medical care with insurance to begin with (it's just that someone is currently making a profit off you hedging your bets).

The truth is, we don't really know what would happen to health care with a new system, except where we've seen it work with appropriate funding. Yes, there's potential for waste, but there's enormous waste in the current system (any hospital still using paper records should be shut down). No, there's no centralized database, which you're going to wish there was when you have a stroke in Cleveland and somebody wants your medical history before treating you. But those shouldn't be show-stoppers. Those should be problems we can look to be solved by a medley of private and public works.

I issue this challenge: If the Pro-Life folks are truly Pro-Life, that shouldn't end with the usual issues. It's not enough to just insist that if you have to go on living, so does everybody else. Why does the philosophy not also suggest a certain responsibility to want to keep each other alive and healthy while they're here? Maybe giving up a little more to Uncle Sam to pay for this stuff is just putting your money where your mouth is.

There is no doubt in mind that when someone becomes sick who you don't know, people (a) either put it out of mind as much as possible, and (b) occasionally try to find karmic/ magical reasons why that person became sick. Ie: I don't really believe we've ever shaken the superstitious belief that maybe when people get sick, maybe sorta fate/ God/ what-have-you, is sharing some message with the healthy? AKA: They deserve it, so how far out of my way should I go?

Traveling outside the state again reminded me of exactly what an absolutely enormous country we live in. There are hundreds of millions of us. We have enormous potential and power in this population. If we willed it, we could see to it that kids could get insurance, that people who lost their jobs could get coverage/ health care, that people whose workplaces are cutting benefits left and right have an option.

Call it "socialism", fine. It's a label as good as any. But it also doesn't immediately mean we're rolling over to work in Stalin's work camps. We might see a little less lucre in our pockets, and maybe we can't afford that box set of Dawson's Creek this month, but maybe it's a sign we're as worried about the next guy as we like to think we are.

And I do not say this lightly as someone who wakes up and checks his wife for any sign of illness every morning. Like anything else, tomorrow you could wake up with FSGS. Or your spouse or children. And you're going to find out that (a) people don't really care, and (b) this could easily wipe you out completely, and when the money goes, so does the ability to keep someone alive. I consider myself incredibly lucky that the government had the foresight to put Medicare in place, which is socialized medicine by any measure.

Your freedom of life will be limited enough. Your choice of employment will decrease in a way you can't begin to imagine as you start looking at benefits packages before salaries, career futures, etc... And you try very, very hard not to become one of those stories you see on the evening news about some middle-class family in Tennessee struggling to make it after one of them suddenly fell ill.

You'll note I've shut off the comments for this post. I don't do this often, but I'm doing it this time. I consider this an issue of life or death for Jamie. That's where it begins and ends. It is not an abstract discussion about whether Obama is trying to turn the whole country upside down as a damn, dirty liberal. Or whether you believe that the government can't do anything right. This is an actual issue that effects millions of people, being voted upon by government workers who get the rad benefits package that many people go to work for the government to obtain in lieu of salary.

I wish you happiness and health for you and your families. May you never be in need of government subsidized medical care. May you never worry about how you'll pay the hospital bill, or worry that your insurer will drop you because you finally need them. May they never declare your life-saving treatment "too experimental". May the people processing your insurance information get your data inputted correctly, and the minimum wage person handling your claim not screw you so they can go to lunch early.

Anyway, in addition to shutting down comments, I'm going on hiatus for a while. This is a non-political blog, and I don't feel comfortable having talked about any of this.

So here's Ren and Stimpy to take your mind off what a naive moron I am: 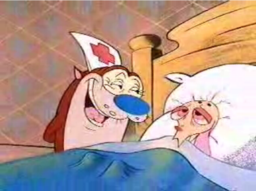