Entire Run of Superman Animated Coming in one Package!

In the mid-90's, the Warner Bros. Animated department put their much-loved Batman series on ice and turned to Metropolis as their next port of call.

The cartoon became hugely influential on the comics, which had become mired in the John Byrne/ Marv Wolfman relaunch, quickly missing the forest for the trees. I believe at the time of the cartoon's debut, we had Mullet-Superman who the writers and artists had some kind of funny ideas about what made a Clark Kent for the 1990's. In many ways, its shocking that this era of Superman didn't make me go running from the character altogether. 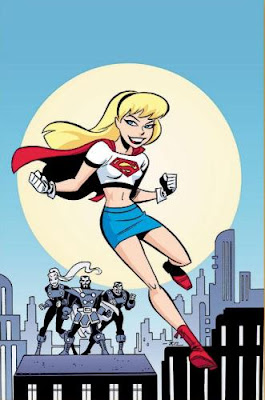 The cartoon (in addition to my pre-Mullet-tude Superman* reading, the movies, and a few other sources) had as much of an influence on my descent into Super-fandom as anything else. Bruce Timm and crew created an interesting mix of modern-Super elements and classic. Many versions of the characters they created eventually became the standards in the comics (including a redesign of Supergirl which found its way into the comics, and led to the current design). A personal favorite of mine was the handling of Toyman, who they made from a sort of obnoxious mad scientist-type into a creepy little psycho in a plastic doll mask.

You can probably credit voice director Andrea Romano for the insanely good voice acting. Many Superfans consider the voice actors for the program as important to the Superman media world as their movie counter-parts. No doubt Tim Daly was a great mild-mannered Kent and earnest Superman, but the rest were of no small note. While its always sad not to be able actually see Dana Delany, her Lois is now iconic, just as Clancy Brown's baritone Lex Luthor exemplified arrogance and malevolence. I was also quite fond of David Kaufman as Jimmy Olsen, Corey Burton as Brainiac, Malcolm McDowell as Metallo... Anyway, this will get boring very quickly. 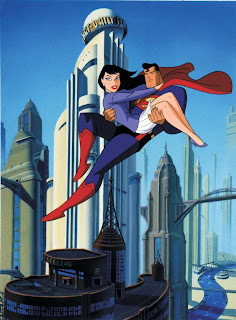 Bruce Timm imported the same blocky character design he had developed in the later seasons of Batman: The Animated Series. This worked terrifically well during cross-overs with Batman, btw (I highly recommend the "World's Finest" 3-episode run. Just great stuff.). Metropolis was imagined as an art-deco city of tomorrow, with freeways running between the skyscrapers and the ground often not in view, perhaps in homage to Fritz Lang's film "Metropolis".

I know many folks want to draw some parallels to the 1940's era Fleischer cartoons, and there are some similarities in aspects of the background design, but the 1990's Superman series borrows only loosely from those cartoons, mostly in how some of the action is choreographed and the occasional prop, such as giant airplane, etc...

The episodes tended to introduce villains as new and unique challenges for Superman, with recurring villain Lex Luthor at the center of Superman's world. However, DC Animated also brought The New Gods to television with the entire cast of cult characters and in a bit of inspired stunt casting, Ed Asner as Granny Goodness (and Michael Ironside as "Darkseid", but that's kind of a "well, who else are you going to cast as Darkseid?" option).

But the series also introduced Superman's rogues gallery, a group a lot less well-known than Batman's crew of villains. Toyman, The Parasite, Brainiac, Bizarro, Metallo, Mxyzptlk (perfectly cast with Gilbert Gottfried), Jax-Ur, etc... but also created at least one new villain with "Livewire", who has since made her way into the comics. 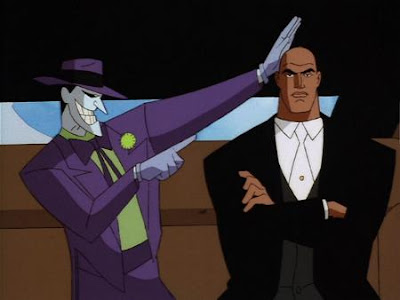 Soon, you will be able to order/ rent/ etc... the Superman Animated series in its entirety. Here.

For those of you with Lil' Leaguers in tow, this might be a fine investment. While Superman doesn't have the pop-culture cache of Spider-Man or Batman, I think the cartoon series makes it pretty clear why Superman is a great character, and not the barrel chested cookie cutter superhero that most people assume.

What's often forgotten is that the series actually had a pretty neat line of toys, that found different gadgets, etc... with which to equip the Man of Steel. I have a small collection of the toys, myself, Bizarro being a personal favorite. 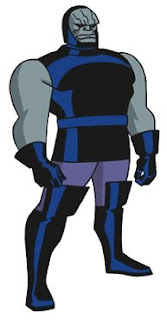 The series didn't last very long (less than 60 episodes, I think), and folded into the Justice League and Justice League Unlimited cartoons, both of which continued the same narrative started in Batman: The Animated series.

*I should point out that the hair wasn't so much the issue as the sort of dull, working-stiff take on Superman that seemed to permeate the post-Death of Superman era. Superman more or less just felt like a stand-in for any generic superhero, only surrounded by the trappings of the Super-verse.

If there is one person I would sleep with soley to advance my career, it would be Andrea Romano.

That woman is the Steven Speilberg of the voice acting world.

Yeah, she really is. As good as the Pixar guys are at straight-up directing, Romano is Queen of not just matching talent to character, but getting grade A performances.

Finally. Took Warner long enough. And it's all in one package. Thank god. I still think Timm and company were at their best with the Justice League Unlimited stuff but there were some gems in the Superman series. The World's Finest teamup, the Darkseid episodes, the shoutout to the Legion. Mxyzptlk, not so much...

They did release the seasons separately at one point (but of course I have them). And I agree, the JLU stuff raised the bar incredibly high.

I have a warm spot in my heart for the Jerry Siegel penned Mxyzptlk stories from back in the day, and that's almost exactly what the series imitated. I prefer the S:AS stuff far and away above the Superfriends Mxyzptlk stuff, which made the character just seem like a jerk.