There's a lot of good in the new DCU Animated film, "Green Lantern: First Flight", but one can't really help but find it hard not to wish WB Animation would let these movies run another 20-30 minutes longer to flesh out the story. For this viewer and comic dork, the movies don't give enough time to allow for the details that (a) fans would appreciate, (b) are part of the character's appeal and charm, and (c) probably would help a bit with what feels like 20 pounds of plot crammed into a 5 pound bag. Its understandable during the first few forays into the format, but at some point, it seems like DCU Animated would take a step back and try to figure out how to improve upon their process.

As a DC character with 50-odd years of history behind him, Hal Jordan, The Guardians, and the Green Lantern Corps are one of the more complete mythologies in the comics-verse. As a kid, I remember starting to uncover GL with Emerald Dawn and the GL series which followed (but which went off the tracks almost immediately as DC refused to let the series return to its conceit of Hal Jordan as one of 3600 space policemen). But the pieces were there. Hal, power batteries, Kilowog, a Guardian or two, and the rings... All kind of fascinating stuff. In high school I had a plastic GL ring that glowed in the dark, that I remember leaving in my window so it would always glow a bit at night.

And in watching the film, while I feel they absolutely tried, and that they did a pretty darn good job of making a movie people might enjoy, it was pretty clear that the parties responsible were not GL fans. It's not that they don't like GL, its that they seem to have just not really soaked in GL long before making their movie.

I'm not particularly wound up that after the canon (and required) transfer of the ring from Abin-Sur to Jordan that the team didn't stick to any known canon (be it Silver Age, Emerald Dawn I, or Johns' reinterpretation). But I do want to point out: There were no actual Lanterns in the Green Lantern movie. Not one.

As near as I can tell, somebody decided that the actual Lanterns/ charging device which each individual Corps member is assigned with their ring, would mess up the story they were trying to tell, and so just omitted them for narrative expediency. Not since Alan Rickman uttered "I AM the Half-Blood Prince!" have I been so underwhelmed by how pre-existing material was handled.

It's a single example, but I think a fairly telling one. 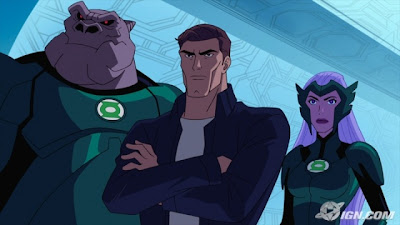 I do think it would have behooved the DCU Animation team to stick closer to Johns' reinterpretation of the GL mythos, as the cartoon feels dated even as one watches it, even with Sinestro in his Sinestro Corps togs instead of the classic Blue and Black.

The plot basically fast forwards through Hal obtaining the ring and speeds past Carol Ferris and Ferris Air in order to cut to the chase, but once you're there, the plot (skewed as I may personally find it) is well executed. For those of you not weighed down by GL comic history, it's an engaging tale of a rookie on the learning curve. And maybe the story is a bit tighter than what I think of when I ponder a character like Sinestro or Ch'P.

In many ways, its sort of "Training Day" by way of GL Corps, and that's somewhat accurate to the comics. It's a good tack to take, provides for a bit of intrigue, but GL fans will feel the tick of the clock hands and WB Animation's self-imposed time limits in cutting out any mention of Korugar and the realization of Sinestro's view of the world. That doesn't mean that it doesn't work in the movie, as Sinestro jumps from Corps Member to Antagonist, but the motivation doesn't stick quite as well. 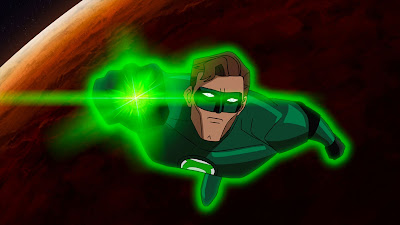 The animation is excellent. It relies on the work of our neighbors from across the Pacific from time-to-time, and often just goes ahead and looks like anime, but I think that's actually pretty great. Its 2009, and if you can't appreciate a little anime in your movie, well, more's the pity. The design work on the costumes completely worked for me, and 90% of the character design. I did NOT like the re-design on Kanjar-Ro, from sharkish freak to semi-generic squid/ bug aliens (but do not get me started on how much I liked the re-design of the Weaponers of Qward). But Ch'p, Kilowog, Arisia, etc... and the Guardians looked great.

The pacing is dead on, the voice acting was very good, even if Kurtwood Smith as Kanjar-Ro was almost distracting in its Kurtwood Smith-ness. I do feel that Meloni was a good choice for Hal Jordan and that Victor Garber is an excellent choice for Sinestro.

I appreciate the work director Lauren Montgomery pulled off with the movie, and I'd be curious to see what she'd do if time and money were available on a Pixar-like scale. She's working with enough constraints to befuddle Mister Miracle, and she's still able to produce work that's setting new standards for storytelling and animation in the long, tough history of super-hero animation. 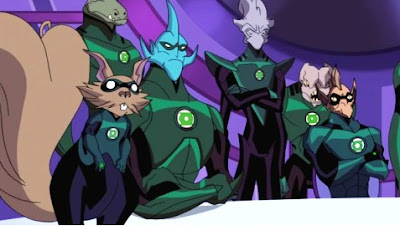 In the end, GL is often a comic-dorks' comic. Like Superman, its full of obscurities that only readers and fans will know (I only know, roughly, 1/3rd of the Lanterns' names I could know). But for folks coming fresh to Green Lantern, its a sort space opera/ fantasy. If you're looking for science in the science fiction, you will be deeply disappointed. But if you're looking for space-faring, interplanetary adventure, I honestly think the movie works pretty well.
Posted by The League at 12:07 PM

I will not read this post... until I see it. Then I look forward to your review.

Well, when your biggest criticism is that there should have been more of the movie, I guess you could be saying a lot worse.

And that's kind of it in a nutshell. I liked what I saw, and wanted more of it. I do have a gripe that they didn't show a single actual lantern, but... almost every other complaint I have stems from that weird self-imposed time limit on these things.

I think Tricia Helfer is a name recognizable to BSG fans, and she does one of the voices.

I should also mention, the extras were very comic-centric, and I enjoyed what I saw. Honestly, part of why I buy these movies is for the documentary extras. Always well handled.

I keep meaning to watch one of these DC Direct to DVD releases. The Green Lantern one interests me quite a bit. Especially if they have Ch'p in it. Him being the second best anthropomorphic super hero since Rocket Raccoon. Hmmm...I wonder if Ch'p will be a Black Lantern?

Black Lantern Ch'P vs. Red Lantern Dex-Starr? I can only wish.

If you do rent from Netflix, make sure you get the complete versions with special features, etc... Those docs are very comics-centric and not just some sketchy "making of" featurette.

Finally seeing it, I agree with your assesment. The "wish their were 20-30 minutes more" is why I think Hal's character is a bit flat because he doesn't have much of a chance to change in the story.

Oh, and when he tricks her into blowing up Kanjar's rod? That has to be one of my favorite switcha-roo moments in a comic book movie.