Comic Suggestion: The Stuff of Legend

On Wednesday I picked up a comic I'd never heard of, which was debuting from a company I'd not yet heard of, and found the start of what I think is going to be an engaging read. 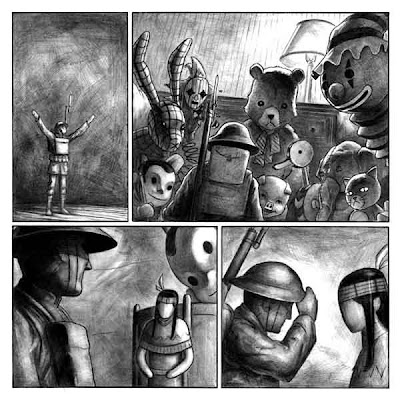 The Stuff of Legend seems, at first, to be a rehashing of Pixar's "Toy Story" series (with a tiny dash of "Monsters, Inc."), but that illusion is quickly dispelled. While I hesitate to say what this comic will be about, in the end, the opening chapter is about toys who see the boy who owns them kidnapped by the Boogeyman. A small handful of toys and the boy's puppy enter "The Dark" (ie: the closet) to find and return the boy, and in The Dark, the toys become realizations of what they represent, be it bear, duck, tin soldier, Indian Princess, etc...

There's something intensely creepy about the comic and the world the writers and artist have created. Discarded toys seem to have joined forces with the Boogeyman, children plucked from their bed in the night, weak-willed toys, etc... It's also all a bit heartbreaking in the manner of "Toy Story II", or "The Brave Little Toaster". 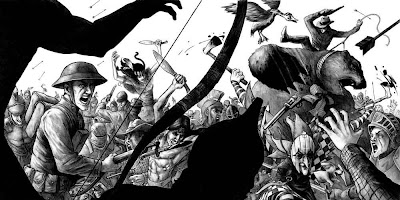 I am, nonetheless, in for the ride. Issue #1 was good stuff, and I will most definitely be picking up issue #2.

Not having kids, I am unsure if this would scare the smaller Leaguers. Much of the stuff in the comic is not necessarily "cute", and it more or less plays on the fears kids may have of their own closets (or create some new fears). But, you know, there's always kids at the Rated-R stuff I see at the Westgate Cinema, so what the hell do I know about what's going to turn your kid into a schizoid? Go nuts.

The format of the comic is in the same square shape that you've seen with "Mouse Guard" and maybe "Superf*ckers" (yes, there is a comic called "Superf*ckers", and it is funny.). A bit unweildy for bagging and boarding, but I assume that when this is released as a hardbound book, it'll fit quite neatly on the shelf. And part of me already knows I'm going to want the hardbound book if the book retains its quality. 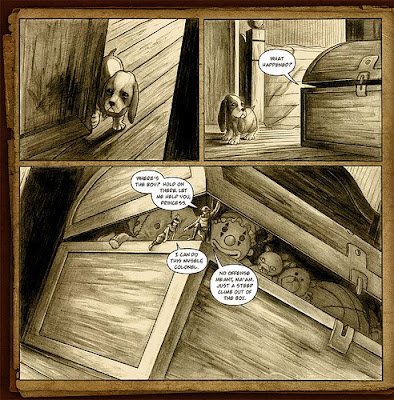 I don't want to oversell the comic. It's just a first issue, but for a comic I picked up on a whim, it's something I hope keeps up a good production schedule and makes a splash. It would be a shame to see this sort of offering disappear for lack of interest.

I'm recommending for fans of Mouse Guard, Bone, and those who don't mind a slow build in their imaginative fiction. (Ed. addition: I kept trying to remember what it reminded me of in spirit, and I think the answer is the DC/ Zuda project: Bayou. I've also been meaning to mention Bayou in these pages, so there you go.)
Posted by The League at 11:01 PM

It looks like it will break my heart. In a good way.