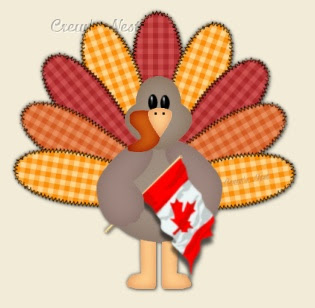 Do you guys get some sort of default Holiday in November that we don't get? I don't know how this works. 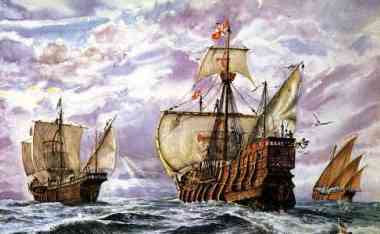 It's not actually a "New World" if people are already living there. Here's to 500 years of poor decision making and syphilis. Don't go to the post office.
Posted by The League at 9:54 AM

Do Canadians have anything to be thankful about? ;-)

Yeah, like the Canadians need another holiday. They hardly have to go to work as it is.

Michele: alienating my Canadian readership since 2009!

I guess Canadians just have a long Holiday-less stretch across November in which they must contemplate how close they are to being Americans without the benefit of our four-day
Holiday weekend and chants of "USA! USA!" whenever anything good happens.

In Canada we get 10 statutory holiday's a year. No we do not get a default holiday in November. It is my personal pet peeve that we do not get November 11th off as it is our Remembrance Day. I'd much rather pay homage to our armed services then get a generic day off in August. Remembrance Day really means something. This is the same thing as Veterans Day in the states.

@Jason I will not take the obvious cheap shot to preserve the tenuous Canadian/USA relations.

Canadians have much to be thankful for.

1) Canadian Ham
2) a huge ex-pat population of comedians
3) they have 52 words for "snow"
4) The fjords are lovely in the springtime
5) Santa lives there
6) Canadian League Football
7) anytime they fall down, a St. Bernard with a cask of brandy shows up
8) Saskatchewan is the bread basket of Canada. At least that's what I put in a poorly researched book report I did in 5th grade.
9) Get the top (best part) of Lake Superior
10) Produced both Nickelodeon's "You Can't Do That on Television!" and "Fifteen"

We have tenuous relations? If we go to war, does that mean I'm, not going to be able to see Rush or The Tragically Hip next they go on tour? (I'm less worried about missing Celine Dion).

@Jason Of course we don't have tenuous relations. We have more of a parasitic relationship where our economy would fall apart if the USA decided not to be our trading partner.

Seriously I'd be very happy if I never heard Rush or the Tragically Hip ever again. We have this thing in Canada called CANCON. It requires that Canadian broadcasters (TV, Radio) must have a certain percentage of Canadian content. This means I get to hear both of those bands about once an hour on the radio. Aggregate that over a lifetime and well you get sick of the bands pretty quick.

I went to see The Hip at a club called La Zona Rosa here in Austin a few years ago and the whole place was filled with people waving Canadian flags and wearing Canadian hockey jerseys. Some girls even asked my friend Jeff and I what part of Canada we were from. I put on my best (but still awful) fake Canadian accent and said, "Winnipeg...?", but they just made a face and wandered away.

I was at that same La Zona Rosa show.

Do they play Neil Young and Joni Mitchell a lot? If so, are you tired of them too?

It would be refreshing to hear more Hip and Rush down here. They play some Rush on classic and/or rock stations, but they don't play them every hour. The Hip are rarely played on any station. Neil Young definitely gets played, but Joni Mitchell is also rarely played (more than the Hip though).

You guys do know that not all Canadians are going to love Rush and the Hip be default, right?

I don't know that at all. Next I suppose you'll be trying to tell me that all Austinites don't love Willie Nelson and Stevie Ray Vaughn.

@Jason When in doubt pretend to be from Newfoundland. Drunk people sound like sober Newfoundlanders so you could plausibly pull that off.

@thevike13 They do play a lot of Neil Young as well but there seems to be more of his songs to go to. I rarely if ever hear Joni Mitchel. She doesn't cross over the rock/classic rock/pop stations like the other bands do.