sometimes its time for Enemy Ace 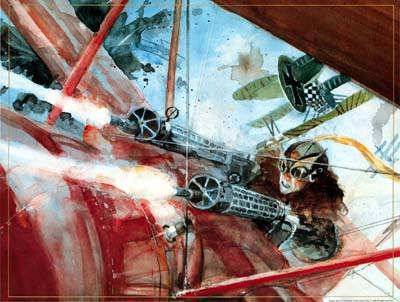 Who painted that shot? It looks like Alex Ross but I'm not 100%.

I don't know what else he's done, but his name is George Pratt. Its from a 1991 original graphic novel "Enemy Ace: War Idyll".

It wasn't my introduction to Enemy Ace, but it certainly helped cement my fondness for the character.

According to Comic Book DB he hasn't done too much.

Alex Ross is nowhere near as impressionistic. And he doesn't work in watercolor.

Actually, I take that back. Apparently Alex Ross does use a lot of watercolor. I was under the impression he primarily was in acrylic. My bad!

Right, they both work in watercolor, as does Sienkiwicz, I believe. Pratt has been involved with a lot of historical art projects at this point, according to his website.

I can certainly see how one would look at this image and see early Ross.

I saw somewhere that Pratt may do a "Haunted Tank" series with Azzarrello. I find that a great idea.

@Ryan I attended a panel with Azzarrello at the Windy City Con. He really came off like a giant wiener. Made me wish I'd never seen him as I'd enjoyed his work on 100 Bullets but he ended up losing a sale on his new crime graphic novel.

Yeah, I'm much more excited about Pratt on Haunted Tank than Azzarello. Honestly, I didn't even like the two or three issues of 100 Bullets I picked up. There's a whole bunch of guys like Azzarrello who write these "gritty" books that just don't sit right with me for some reasons. Plus, his Superman and Batman runs were equally useless.

Azzarrello pretty much admitted during that panel that he doesn't even like doing super hero comics.