Judy and Dick knocked themselves out on Turkey Day this year. A fantastic spread with a delicious turkey at the center, potatoes, sweet potatoes, green bean casserole, home-made rolls, cranberries, a fantastic addition of stewed tomatoes via K's family (like, dessert good), pumpkin and chocolate pies...

Anyway, we Americans (and many in the west) are lucky to have so much, and that's something I think was on many minds. KareBear just returned from Kenya where she was be-spectacling folks in need of eye glasses, and its good to have that kind of touchstone to know that we live differently, and not to forget that there's a reason to be grateful and give thanks.

This was Dug and K's first Thanksgiving with us as a married couple, and also our first Turkey Day with Ciera as part of the family. She's a firecracker, and smart. Its fun to spend time with her.

Here's a photo Jason took of the partially assembled family as we make our plates. 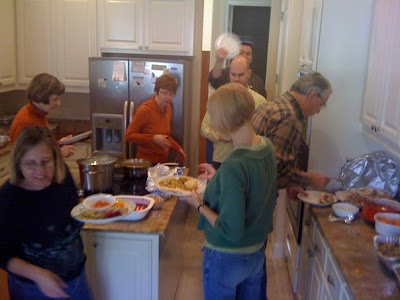 from left: Cousin Sue, KareBear, Judy, Jamie, me smashing a plate on Dug's head, Dug, The Admiral getting into the turkey. 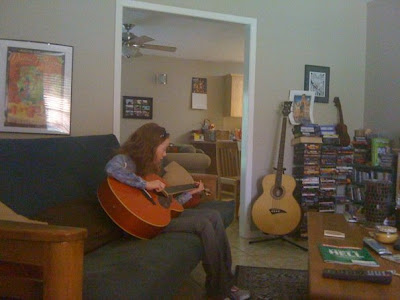 Prior to the dinner, some met up at Jason's to carpool south to Dick and Judy's. Ciera has been taking guitar lessons. Here she plays some tunes on Jason's guitar.

After dinner, I tossed around a football and frisbee with Ciera, Jamie and Kristen, then watched the Cowboys game. It was very All-American, which is kind of how we roll on Thanksgiving.

Then Northward where many of us met up to watch the UT game, gnash teeth, and finally collapse in relief when TAMU missed that final field goal. Every darn year that game is unpredictable, and no matter how TAMU has played all season, UT fans know that the rivalry may be friendly, but when its at Kyle Field, the Aggies are not kidding about this 12th Man business.

Poor Scout is afraid of the noise the people make during the games. She was alternately seeking attention and hiding all evening.

Hope you guys had a great Turkey Day. I'm thankful for having such an amazing family, and am really looking forward to the rest of the weekend.
Posted by The League at 12:15 AM

Isn't this blog over yet? I was promised that it was ending...

It won't until Ryan finishes Children of Dune and then transforms into a giant god emperor worm. Then the blog will shut down.

Personally, I'm hanging in there until 2012 so I can write a snarky review of the end of the world.

I hope you'll permit me the honor of guest blogging, if I make it that far.

NOM! Glad you liked the tomatoes...I don't think I've persuaded Doug to try them yet! It'll be a McBride in-law thing.