So, last night I finally got around to watching the most recent episode (week 3) of "V" (featuring Elizabeth Mitchell).

At the end of the episode, I proclaimed "I think that's my last episode of 'V'".

Jamie informed me that there's only one more filmed episode of the show, or something. She sort of tends to know these things thanks to her handy subscription of Entertainment Weekly.

So for anyone who believed it is a mini-series, you were dealing with better info than what I had. But if it is a 4-episode series, its got one of the least impressive trajectories of any mini I've had the pleasure of seeing.

I will review episode 4, just to round it out. Also, Elizabeth Mitchell. 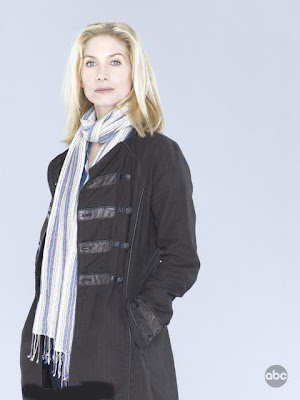 From what I understand, you're both right. This was a 4 episode "soft opening" or something, where they have every intention of creating buzz, then withholding further episodes until March or something.

The wisdom seems to be "Hey, people like the HBO model where a show comes on and they play 16 episodes with no reruns, and it's all on demand anyway, or then you can buy the DVD and just watch huge hunks of tv what and when you want. Well, this should shake up the viewers expectations! Get them hooked and then no more for months!" It's like the TV execs were watching the South Park where Cartman won't let anyone in his amusement park.

Doesn't help that the show is unwatchable, of course.

I had also heard stories that the show is having a hard time with production. Apparently people have been fired, etc... And someone told me that what was to be a 2-hour pilot was crammed into the one hour we saw.

I willw atch these four episodes, but then I guess I'm out. I can't take any more of villains looking out of windows and speaking in monotone.

Yeah, very disappointing, and the sad thing is that it seems like there was some really interesting material in there to work with from the original series. Now more than ever before, producers need to learn that known actors and lots of fancy special effects just aren't as important as good writing. In an age where computer graphics are making even the most spectacular effects ubiquitous and sort of "ho hum", audiences are actually start to revert back to caring about the qualities of the stories and ideas rather than remainign content to be dazzled by images. This new V series just hasn't had much to offer.

I didn't make it past the first episode.

I watched the first episode. I got this weird feeling like, "they are setting some shit up that I really can't commit to sticking around for resolution. . .uh, for." It's hard to explain. All the aliens, and people, and who's an alien and who's a person and who does who align with and double crosses and. . .fuck it.

It was like getting a children's choose-your-own-adventure book with the jaded attitude of an adult: I thought that no matter where this goes it's going to be arbitrary and tiresome.

Yeah, there's an audience out there of people who CANNOT BELIEVE SO-AND-SO IS A DOUBLE AGENT!!! I am not among that audience. And that is absolutely where this show is going. Who is a lizard? Who isn't? Who will find out that they were so undercover THEY NEVER KNEW THEY WERE A LIZARD?

And the thing is, all that stuff only matters (to me) if I care who the characters are. I don't.

I am realizing I would have been happier with a show called "Elizabeth Mitchell sips pina coladas poolside and occasionally gets in and out of the water".

I tried watching again last night and only got halfway through the episode. Everyone on that show is a stereotype, from bottom to top, and I don't find any of them interesting in the slightest. the plot stinks, the dialogue stinks, etc., etc..
Why do netwroks finally decide to spend money on a sci fi show and then create something like this. The sad part is that I'm convinced there are probably a whole lot of interesting scripts and screenplays out there that we never see because TV producers are convinced that they're "too weird".