This episode was a real turning point for "V". It marked the moment when you realized that the writers and producers did, in fact, have an idea of what they were doing, but that idea is just sort of dumb.

Once again in the 4th episode, character development remains non-existent except for the "shocking revelation" that Padre Blando is a former soldier (which means a plot line about guilt, overcoming guilt, and explaining how he'll henceforth be a bad-ass - ie: American Sayid.). Villains continued to stare out of windows. Erica's parenting skills put her more in the class of passive roommate than "Mom". And the fate of the entire known galaxy of sentients depends on a kid with a brain the size of a walnut.

On the plus side: Apparently there IS a reason that the V's do not wander around their ships looking like lizards, and it has something to do with trauma that occurs if they don't wear their people-suits. Which... yeah. It makes a convenient plot device, but makes the people-suits no less ridiculous.

In this episode, the show writers once again ham-handedly tried to reflect the "ripped from the headlines" approach, by continuing to exploit our superstitious beliefs about modern medicine by revealing that the flu vaccine is actually an alien plot against us (that's what we need. More people deciding not to get the flu shot. Slow clap, ABC.).

As revealed last week, we have aliens acting as if a dweebish 17-year old* is some sort of lynchpin for their ability to conquer Earth (and that teen's mom just happens to be one of a few people that know tha V's are up to no good. What a koinky-dink.).

Look, aliens. If you're going to conquer earth, and your plan relies upon seducing a 17 year old with a willing blond (easy) and counting upon a slow witted 17 year old in any way (not so easy), I hope there's a "Plan B". I recommend lasers.

At this point, I'm almost curious to see what happens in March when the show returns, because I want to see how this Rube Goldberg plot to take over the Earth unfolds, and how it couldn't just be done better with nukes or germ warfare or a million other options.

The episode also leaned upon the "oh, my God! How did that happen? Flashback to 14 hours earlier" in media res plot device to absolutely no positive effect. That device is supposed to be there for when something indicated in the scene (a) actually happens, or (b) matters.

At some point I made a comment that a hapless and easily dispatched security guard became a focus for the show, and... in the final scenes of the episode, he actually did reappear as a plot point. It was kind of exciting that I called that one out. But, you know, you have a seemingly pointless lingering shot of a guy...

Had the US not had major security changes in the past 10 years, some of "V" would be a bit easier to buy. It is significantly harder to believe that the world would be happily letting aliens treat our ill and integrate into our society within weeks of their arrival. I was laughing so hard I had to pause the DVR when our Arch Villainess casually announces she's got a miracle shot which, apparently, had FDA approval and was being released immediately. We've got cures for the common cold we haven't managed to squeeze through the approval process.

One of the reasons "Alien Nation" never worked for me was that the producers were never creative enough to ponder how different an alien culture might be from our own. District 9 is one of the few movies that, though borrowing heavily from refugeeism as seen in South Africa, bothered to make the aliens significantly different from the culture they approached, not just in looks, but in culture, etc... Honestly, if an alien with no accent of any sort, who looked a bit like Swiss Miss told me she heard a place had "amazing pizza", or that it even knew what pizza was, you should be terrified. How long had these aliens been watching? And what were they doing now?

The concept of the alien technology is also all straight from the Ikea catalog, the designs are uninspired and insipid, and I think last night they tried to pass off a dental lamp for super-science. If we're to believe alien technology looks like a Fujitsu tablet PC, that the interiors of their ships look like the causeway at a convention center, and that they all dress in leftovers from the STNG wardrobe department, why bother with appearing to be aliens at all?

The tragedy of V is that it didn't need to be hackneyed and trite. What COULD have been an interesting series, looking at how this sort of thing was handled on local, federal and an international level, instead (much like Flash Forward) became much more about an FBI in pursuit of badguys. The opportunity to see a White House dealing with the arrival of seemingly benevolent aliens seems infinitely more interesting than Erica Evans doing database searches, which is what the show effectively turned into last episode (also, shouldn't she be at work? At least a little?). How Earth handles seemingly benevolent gifts of science and industry over even a few months might have at least given us something to hang the plot on.

Instead, the show focuses entirely on only five or six people, turning intergalactic warfare into a parlor mystery. To that end, when our sleeper-agent V's human girlfriend** happened to be the shrink to Rodney the Rebellious Teen (the same teen who the leader of an alien race believes is going to be their "in" to humanity), any sense of scale the show carried was poured down the drain. These characters simply don't need to be connected so tightly.

I don't want to be rude, but this is a show that counts on its audience to have formed a concept of how government, the FDA, the military, police, religion, etc... function entirely by watching other TV shows. To just go along with a scenario in which THIS is how the world would react to aliens seems... bizarre. It also counts on an audience to get excited by retread plot points, hackey villainous behavior, and to give no critical examination of the actual events of the story and just coast along with whatever the show shovels out. Getting excited that the actors from Firefly are getting work again isn't a pass.

Honestly, the show just sort of makes me mad. Elizabeth Mitchell is a talented and foxy actress, and she's stuck in a lead role with all the depth of a kiddy pool. It's bad enough that the producers lifted an old concept, but the stunning lack of vision for how this would be an improvement is disappointing.

I'm told that the show will have new producers when it returns, and so part of me wants to give the show another shot. After all, there IS opportunity to retool the show and possibly save it from itself. 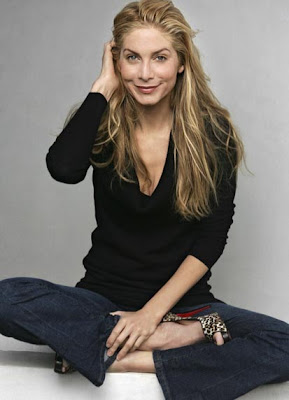 *I have heard a lot of people's messages on the phone. Only on TV do I hear the ever-present "This is (fill-in-blank). You know what to do." as an instruction for leaving a message. I don't know if that's a standard LA-thing, or what... But, I doubt anybody ever actually used "you know what to do" as an outgoing message with such a terrific lack of irony.

Seriously, stop it. It makes your heroes sound douche-y.

**Also, must everyone who mentions they're feeling a bit off on TV either (a) be diagnosed with an incurable and fatal disease, or (b) be pregnant? And didn't we already do the whole "V-Baby" thing pretty ineffectively in the original series? You couldn't hold out a little longer or telegraph that one a little more?
Posted by The League at 10:51 PM

I have not watched the show. I don't even read your reviews of each episode but I do page down until I see the obligatory Elizabeth Mitchell pic. Thanks!

"I don't want to be rude, but this is a show that counts on its audience to have formed a concept of how government, the FDA, the military, police, religion, etc... function entirely by watching other TV shows."

This is my biggest critique of so many shows these days. We have a generation of TV writers who grew up watching mediocre TV shows about doctors, lawyers, and cops, and they write as if watching those shows constituted significant research into the field. This is why lawyers on TV make frivolous and ridiculous objections (but do so with earnest indignation), this is why police officers and FBI agents routinely violate long recognized constitutional protections without apparently realizing (thereby threatening the conviction they so sincerely pursue), and why doctors so often commit malpractice or violate ethical cannons without consequence. In V, just as in FlashForward, some low level FBI agent is the protagonist, when there are so many other angles to explore, but the TV writers think the federal agent is the only way to do this and that and the other.

I think you made comment of this to me in one context or another a while back, and when watching this show, it really bugs me in particular. I think because its so half-baked and so directly affects the story.

And, Simon, I don't want to get 100% negative. We have to find something we can all appreciate in the show.

@JMD I have to agree with you as this is a malaise that affects popular media in general. I'm glad that I'm not in charge of some of these shows as the villains would be absolutely ruthless. The hero wouldn't make it to the third episode.

@Ryan No worries, I wasn't really interested in it to begin with and I have other better TV to watch.

Well, were the blog to continue, I am sure I would have continued to find reasons to post pictures of Ms. Mitchell. Lost is coming back, right?

I would like to find out at least a few hill billys raped some aliens.

Thank you for watching this and letting me know not to waste my time. You're the go to guy for maximum TV efficiency consumption. As for you now soon to be empty hour of television when V is over, may I suggest Chuck?

Sorry, I was thinking of the Robot Chicken when the rednecks caught an aliens and "probed" him.

WTF meaning "Why the Face?", right?