What a strange, strange week.

Television pitchman Billy Mays joins McMahon, Fawcett and Jackson as the fourth celebrity death in a week. Mays was a smaller blip on the cultural radar than any of other three, but was a television fixture for several years.

He was the gentleman with the unmistakable voice and beard who I first recall seeing pitching "Oxi-Clean". 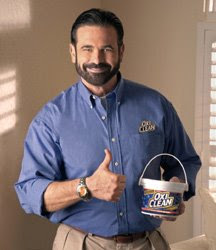 Leaguers, I know this sounds a little weird, but I actually did wind up buying Oxi-Clean, and that stuff works wonders on the many potential stains my pets leave around the house. So if you don't trust Billy Mays, there's your unpaid endorsement from a trusted source.

Mays might have been yet another bizarre fixture of bad-timeslots on TV, but had recently been a part of a show called "Pitchmen" on the Discovery Channel. I've seen an episode or two, and it was interesting to see how the whole process works. And, of course, you got to see Mays as more than just a gadfly intensely hawking products.

At last check, no details had been forthcoming around May's death, except that he had been on a flight that had a rough landing. Mays was quoted an mentioning that he'd hit his head.

Folks might dislike Mays as they associate him with the annoyance that is the infomercial, but as the Oxi-Clean thing worked out for me, and I liked his how on Discovery, I thought he was okay.