The passing of Farrah Fawcett would have been the big headline had the sudden death of Michael Jackson not occurred within hours.

I didn't follow Fawcett's career, in particular. I was quite young during the Charlie's Angel's era, and when "The Burning Bed" aired, I was at an age where that probably wasn't going to be something I was watching.

When I think of Fawcett, literally every time, this is the image that comes to mind: 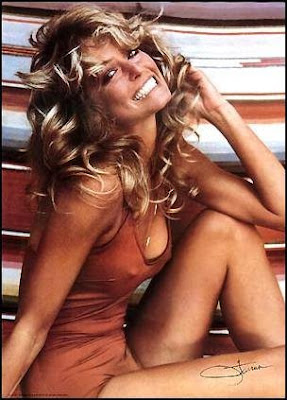 I don't know what the current status is, but at one point, this was (by far) the best selling poster, ever.

Even many Central Texans don't know that Fawcett is a Longhorn. She's actually from Corpus Cristi, and attended UT circa 1968. The crazy bit is that, according to Wikipedia, she lived in Jester. Who knew?

She was in a large number of film and television projects, and somehow managed to be married to Lee Majors at one point, which is awesome (and had such an impact, I heard one eulogy incorrectly identify her as Farrah Fawcett-Majors).

Of course Fawcett had most recently been in the public eye with her fight against cancer.

Interestingly, Fawcett's 1970's style had become re-adopted by today's youth, whether they knew the source of the look or not. But a quick Google Image search is kind of interesting. 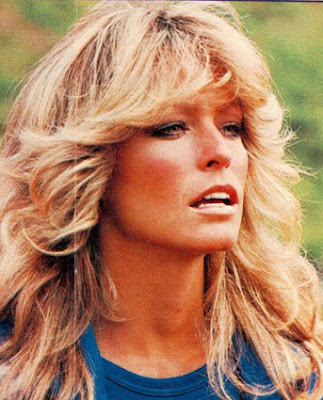 In this image, Fawcett has just run out her door in time to see the ice cream truck is now too far down the street to catch

Sorry to hear about Farrah. Everyone over hear is going nuts for Jacko's death. Can't get away from his music. I think Farrah was much cooler.

Jamie was wondering if you'd participated in the mass Moonwalk in London. I suspected that you had not.

Fun Fact: Not only did she go to UT (and have family in Spring, TX, but I digress) she was a student of Professor Umlauf and there is a sculpture of her in his sculpture garden.

I think Farrah's and MJ's loss hits at different points in our culture. I had no idea she was only on Charlie's Angels for one season. I always knew that she attended UT. I think these deaths are much more powerful now because we've all grown up with these personalities making an impression during our childhood and adolescent years.

Strack Farms BBQ in Spring had an autographed photo of Farrah on the wall. Rumor was she visited the place a few times.