Not sure what the weekend holds for posting, so I want to take a minute to salute the U.S. of A.

Whenever I might get a little down about the way our nation is headed, I get a little reminder, such as our friends in Iran, who are now in a struggle to see justice done, to be able to believe their voices and themselves and their ideals are known by their leaders and government. The past few weeks should be a reminder to us Americans and to our government that the government should never be too far from being us, that it should exist and operate with our consent. And when we challenge that government's will or authority, we are so, so astoundingly lucky to live in a nation where our government does not take to the air suggesting that voices raised in defiance should be permanently silenced.

But we're far from perfect. We receive daily and weekly reminders of the failures of government. I'm still keeping my eye on the events in Ft. Worth, which fell on the anniversary of Stonewall. Its not even surprising any more when governments cease-up as our politicians who run on their moral convictions disappear for long weekends over-seas with their mistresses. Our states go bankrupt (well done, California). That's this week's news.

At the end of the day, though, we are not our government. While I celebrate the ideals embodied in the constitution, even that document wasn't ratified until well after July 4th, 1776 (but that time for honest discussion did lead to the Bill of Rights, of course). If we're going to celebrate the day, I celebrate what, despite our differences, we do when we do it together. It doesn't matter if it's watching fireworks while the local symphony puts on its annual performance of the 1812 Overture, or whether its voices raised together as we mumble our way through the National Anthem. Or showing up at the food pantry, or to walk together to raise money for a cause. We're all of that, too.

It's foolish to buy the lines thrown around during elections when one politician suggests the other doesn't love his country because someone said the nation has a past of which it ought not necessarily be entirely proud. Its in seeing the flaws, the broken dreams and lost lives as counter-measure to what good the country has done that you can see the promise of what we'd like to offer every person within these borders and beyond. It tells us what we can do better. And when we live through a time in which we feel the government has steered wrong, we can imagine that the winds of change will blow and the ship will find its course.

I need to see more of the country. I'd very much like to see its capitols and landmarks. Its parks, and its beaches. See what my fellow Americans are like in places like Boston and Los Angeles. I don't get out enough.

But... Happy B-Day, America. Hopefully we won't accidentally set you on fire with a bottle rocket. 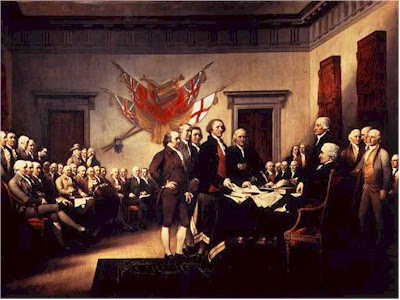 like everything else iconic in history, this didn't really happen, either
Posted by The League at 10:42 PM

Crap. I forgot to buy sparklers.