The Maxx that I cared about in the 1990's was not the soda shop frequented by the "Saved By The Bell" kids.

I had not read Sam Keith's comic when The Maxx debuted on MTV circa 1994. It was part of the Image onslaught of comics that my wallet couldn't handle, and too many of which focused on art over story or substance in an era when Neil Gaiman was writing Sandman, Grant Morrison was writing The Invisibles, Garth Ennis was starting to make some noise in the US, and ideas like "Kid Eternity" were a viable part of the comic landscape (and, I should mention, Marvel had just done the Clone Wars deal and was close to filing for bankruptcy).

And then, between Beastie Boys videos, I saw the ads for The Maxx.

It would be fairly far into the episodes of The Maxx that it would become clear to me that The Maxx was never really intended to be about dimension-hopping superheroics and, instead, was much more about somebody's (I'd suggest Sam Keith's) issues with women. If Superman was the man the Clark Kents of the world wished they could be to impress their Lois, then The Maxx was somebody working out their feelings both about who they wished they could be (still oddly grotesque and sort of slow), mixed in equal parts with who they strongly suspected they appeared to be to the world (a badly dressed hobo in a box with violent tendencies).

The series didn't make it as a cartoon on MTV (and I mourn the loss of an MTV that was trying new things all the time, from The Maxx to Aeon Flux). It did run as a fairly successful creator-owned series at Image for about 35 issues, plus spin-off's and tie-ins'. 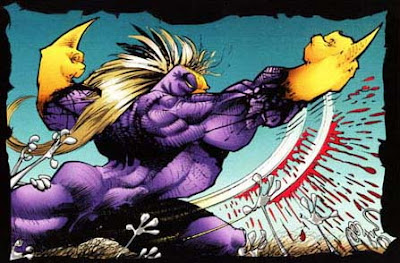 The Maxx does not care to debate what the definition of what "Isz" is.

I'm not sure a literal reading of The Maxx, no matter how surreal the material and art, is what Keith had in mind. But its also difficult at times to discern exactly what he was trying to do, exactly, other than create an access point to approach certain characters and stories he wanted to work through. Were the "Isz" the ugly truth trying to drag down The Maxx? If the Outback wasn't real, and the "real world" wasn't real, then...

Anyway, it was a beautiful use of the medium as storytelling device, and the art and layout astoundingly handled, with no choice made arbitrarily.

At one point I had a fairly complete Maxx collection, but I believe it disappeared during a purge a while back. It's a fun read, but I decided to just hang on to the trade apperback collections released a few years ago and available at quality comic shops (and online) from DC.

Its been a long, long time since I read much in the way of The Maxx, but MTV has recently brought the entire cartoon series online. The cartoons are exact panels from the comics, with what I'd consider to be good voice acting. It's a bit of a trippy cartoon. But in the 1990's, when I was surprised if a comic character's costume was even the right color, seeing a comic so literally translated out of the comic format was an absolute revelation.

The series does touch on subject matter that has become a bit verboten in the ensuing years, at least in part because some of Julie's origin specifics became overused in less than well-handled fashion. But it was also an interesting mix of people behaving like people and a cracked out world of superheroes, wild psychic landscapes and flying whales. All fitting within a specific vision.

Keith would go on to do other series, like Zero Girl, Four Women and others, including a Batman comic series or two. I still feel, when I read his independent work, that he's working his way through something.

Years and years ago, a Maxx Christmas ornament was my first eBay purchase (and visitors to League HQ during the Holiday season can find it on the tree). And a Maxx action figure (with Isz) resides on my desk.

It may be about time I re-watched the cartoon and/ or re-read the series.
Posted by The League at 10:03 PM

I recall hearing a rumor (in Jester, no less) that they would be having auditions for voices for the cartoon of Maxx.

I wanted to be a part of that SO bad.

There is a new maxx action figure Series as well at www.shockertoys.com

Thank you, anonymous! And where does on obtain Shocker Toys? At the URL above, or at their local vendor?