I'm not sure if this includes the "draft" posts I never bothered to post nor delete. It also doesn't include the first week of posts Jim D. had to salvage when I committed blogocide early on, then JimD convinced me to have a change of heart. But, according to Blogger, this is big 2000.

When I think of the time I've spent working on this blog, I realize I could have obtained a masters degree, written several novels, or dug a tunnel between here and Guadalajara. It's kind of pathetic. Instead, I've spent countless hours navel gazing, performing haphazard self examination and generally wasting everyone's time. I'm glad to see so many of you who've chosen to stick with me every miserable step of the way. After all, I already know what I think, so you keep coming back, I suppose to see what nonse will appear here as part of my permanent record.

League of Melbotis has been instrumental in my ability to locate old friends, make new friends, and keep up friendships in ways I never would have predicted. We've been linked to from USA Today, have made appearances in some odd blogs, and can proudly state that we've become the number one destination for folks looking for pictures of "supergirl + naked" using Google. I am so proud.

We've traced my dissatisfaction with Chandler, Arizona straight through to my final, crucial decision to skip town and return to my beloved Austin in my beloved Texas. I'm not sure that move would have happened as soon as it did, in the way that it did, had I not had LoM as a communication tool between myself and some other parties. Nor do I think my leap would have made as much sense to friends and family had I not chronicled my dissatisfaction with such excrutiating detail. 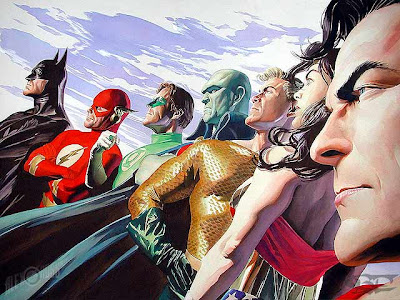 The assembled Justice League of America looks back on 2000 posts

It's my hope I've been able to somehow pique your interest in the sequential art form known as "comics" with my unending diatribes which I shall qualify as my "enthusiasm" for the subject. Comics were always my bag, but with very few entertainment options and fewer social outlets with my arrival in PHX, comics became a great source of distraction and amusement for me during some pretty tough times over the past few years. It's been my hope that you guys might hit your local comic shop once in a while to see what's available, and maybe find something you can enjoy.

I've spent no small amount of time dwelling upon all things Superman, and will continue to do so. It's my hope that I've dragged you kicking and screaming from seeing Superman as a silly man ina cape to a pop-culture icon and symbol for modern mythology. I also hope I conned you into seeing this summer's "Superman Returns".

Some of this enthusiasm you've shared with me, some less. I've taken my desire to blog upon comics and tried to do something with it. I hope you're either checking out Comic Fodder or breathing a sigh of relief that every third post isn't about the genius of Justice Society of America. Without years of practice here, I sincerely doubt I would have made the decision to throw my hat in the ring and give such an effort a try.

We've dwelt upon all things pet-related. I confess, the blog was much heavier in pet-related posts in the first year. Honestly, the pets sort of have their patterns, and I'm not sure how much of their daily activity to cover which won't start to make me the "crazy dog guy".

In the past few years I've also become much more interested in sports, so I appreciate everyone humoring me as I waxed rhapsodic upon the 2005 Lonhorns, the Phoenix Suns, the lowly Diamondbacks, and my occasional bursts of enthusiasm for various NFL teams. Sports is the great equalizer.

And League of Melbotis has given me my rooftop from which I get to regularly proclaim that I am, indeed, a lucky guy. Not too many people get to meet someone who can be their high-fiving best friend and get to marry them. Nor do I know of anyone else who is married who has a spouse as patient, understanding and as much fun as Jamie (sorry, rest of the world. It's true.). And she's given up a lot of quiet hours while I've sat and click-clacked on a laptop, in order to post as regularly as possible. So thanks, Leaguers, for letting me try to get you to know Jamie, just a little.


It seems like just yesterday I was telling JimD I didn't think I had enough to say to sustain a blog. And I was right, but that hasn't stopped me.

There are no plans for League of Melbotis to disappear anytime soon. I know I occasionally whine about a lack of readership, or that I feel as if I'm whistling into the wind here, but by-and-large, this has been a phenomenal experience for me, and I wouldn't trade it for the world.

Thanks to all of you for making 2000 posts not just possible, but something I wanted to do. 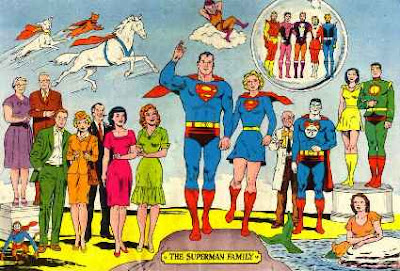 The entire Superman Family wishes you a happy 2000th post
Posted by The League at 7:47 PM

Hearty congratulations to the League!

Congrats on reaching this milestone.

I am actually waiting for the LoM Official Podcast. I would like to hear what Mel, Lucy and Jeff have to say about life in general.

2000? Man, that is something. If you're looking for meaning, my best guess is probably metaphysical. You blog, therefore you are. You League, therefore you live.

I could be wrong. Steanso is a better authority on this stuff. I was a better disc jockey than philosopher.

Congratulations - Mel, Lucy (and even Jeff although he doesn't show it) and I are very proud of you!!!

Karebear wants to congratulate you on your blogs. Hope you are also doing some drawing. Does everyone know you are an artist as well? Keep it up!

i didn't know that lee was a disc jockey. his philosophizing ain't that shabby.

I remember when JimD first sent me a link to LoM. I read the first few posts, then forgot about it. But, JimD kept bugging me about reading it. Like most of his movie recommendations, I'm glad I took it. Althought wit LoM now based in Austin, I feel like a second-rate Leaguer.

A hearty congratulations! You've also just assured me that I will never make it through your archives like I once intended to do.

I am sorta the Maxwell Lord of the LOM, well, at least, the pre-Infinite Crisis Maxwell Lord, anyway. -JD

Congrats on the 2000th post. It's hard to believe there have been that many until you start looking through the archives. You were the first person that I knew that had a blog.

Also, I wanted to send a special thank you for the birthday posts and wishes. I especially laughed at your second post where you shamed Leaguers into wishing me a happy birthday. I had not thought of the shame angle in getting birthday wishes, but will use it next year. :-)

Also, thanks to all of the Leaguers' who wished me a happy birthday. Many of you I have known for a long time (some 15+ years) whereas others I have never met in person (I missed the League Xmas party this year, but hope to make it in 2007 to meet more Leaguers). Regardless, it was great to read everyone's notes and well wishes on my birthday. Thanks again everyone. It was a definitely a pick me up after a tough year.

To answer a few of the questions that were pondered: I'm actually 34, and grasping on to every year I have left in my 30s. I still get carded, but not as much as I used to before I had a goatee. If I were 40, I think I would still be in pretty damn good shape for a 40 year old (and not bad looking either). However, as a 34 year old, I'm probably in about average shape, but am in better shape than last year (so I'm making progress). And Peebo is right, I do have masochistic tendencies for continuing to support and love the Minnesota Vikings and A&M athletics teams, and for getting a degree in electrical engineering (if you don't like or cannot appreciate pain, engineering is not for you).

I had not thought about the first day that I met you, Ryan, in a long time. In fact, I have been struggling recently with trying to remember the first time Jason and I actually met in middle school. Anyway, I had forgotten about the first time we met, but you have now refreshed my memory. Jas and I were indeed going through your comics in your room while you weren't there. I remember what we were looking for. We were looking for your original first edition Teenage Mutant Ninja Turtles comics. At the time, I had never heard of them, and Jas was trying to explain to me that there were these badass turtles that were ninjas, and all of them had one particular ninja weapon that they specialized in. This was back before Independent comics publishers were as popular as they are now. In fact, correct me if I'm wrong, but I think TMNT was one of the comics that really broke open the market for the smaller, independent comic publishers. Anyway, being more of a mainstream comics guy and a guy that had not gotten back into comics again (that addiction would come within a year or two after meeting both of you), I couldn't quite believe that there was a comic out there about these badass mutant ninja turtles so Jas said my brother has the comics, we'll just go into his room since he's not home right now, and look through his comics till we find them. I think I asked "Are you sure he won't mind us doing this?" to which I'm not even sure your brother answered or he just waved his hand and told me not to worry about it (I don't think Jas was too concerned about your feelings or privacy back in middle school). I thought I would mention this to fill in the story about what we were doing there. Anyway, I can't remember many other details after that, although I do remember you coming home to find us going through your stuff in your room. It's funny. I can still picture your room in your parents' old house on Pencewood. Up the stairs, past Jason's, in the corner with a window facing the front yard. Actually, I still remember most of the inside layout of your house on Pencewood (as I'm sure Peebo does too).

I'm proud and honored to be a charter member of The League of Melbotis. Keep up the great work!

I'm glad you clarified, Jim. I'd hate to have to break your neck.

Ah. Jason and I had a sort of understanding that if stuff was just sitting out or on a shelf, it was fair game. And, of course, I am always happy to share my comics.

TMNT caused a huge boom in black and white independents in the mid-80's. Unfortunately, it also caused a million imitators such as Adolescent Radioactive Kung-Fu Hamsters (no, really). It did, briefly, open the door for a lot of indie ideas which matured into real publishers, like Dark Horse.